This patient in her late forties has history was significant for repeated bouts of weight gain and weight loss which overtime caused her to have significant excess tissue around her lower face and neck. She came to see Dr. Layliev because she wanted to restore her youthful look. Dr. Layliev performed a facelift and necklift. He used a limited incision approach, to keep her temporal hairline position the same. Traditional facelift incisions can often cause the temporal hairline to be further back, which can ironically make a patient appear older and unnatural; using the limited incision approach, this has not happened. The scars in front of her ears and behind the ears are barely visible and will continue to fade. Photos are four months post op, she now looks younger and feels younger. 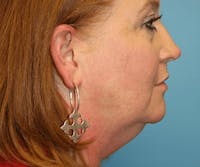 See Our Results in the Wild

We invite you to discover the premier Long Island cosmetic surgery center and schedule a private consultation. Call us or contact us online to arrange a time that is convenient for you.

Our Feb Specials are Here!